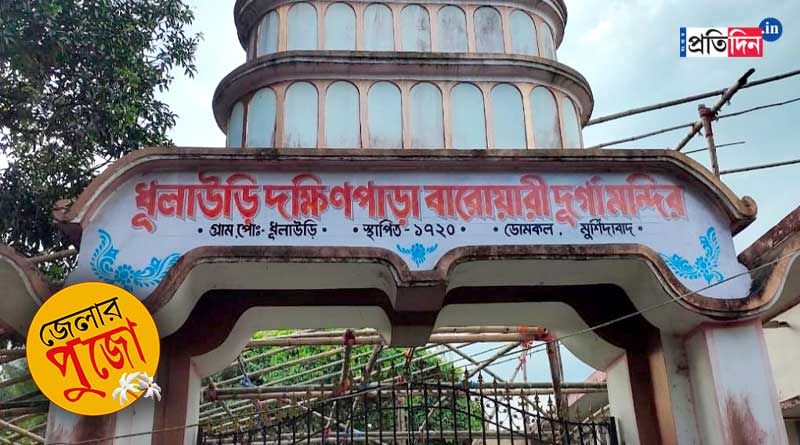 Atul Chandra Nag: The main gate of the temple says that it was established in 1702. But the locals claim that the puja is happening even before that. Because before the construction of this temple, mother’s worship was done elsewhere in the village in Uttarpara. Wherever it is, and however old it may be, even today the dust of Murshidabad’s Domkal still remains a log of beginnings in the structure of Dakshinpara Barwari Durga Puja. which is collected even after the sacrifice of the idol. Entrepreneurs said that those who are involved in the puja work, observe moderation by eating non-vegetarian food a few days before the puja. The committee has already appointed a separate person for that. Also no work of that puja is done in Bhadra month. Even the puja meeting does not take place. The work of making Ekchala Devi idols is mostly done in the month of Shravan. The rest of the work is done in the month of Ashwin.

Arvind Mondal, founder and former editor of the puja, said, “Durga Maa Jagrat of Dhulauri is awakened. Many people get results by vowing here. And so there is a huge gathering of devotees in the temple on the few days of the puja.” He said, “We don’t have any theme. Yet people from far and wide come to the mother only to pray for her blessings.” The number 18 is closely associated with the worship of this temple. From the beginning of Puja, 18 banana, 18 coconut, 18 betel nut, betel nut. Even, in the case of consuming 18 pints or 18 liters of milk, 18 liters of milk is 18 pints. Puja’s Atap rice consists of 18 times and 18 pitchers of Ganges water. Arvind Mondal said, “One day before Shashti after Mahalaya, 9 devotees reached the temple with 18 jugs of Ganga water from Ganga Ghat in Baharampur, nine carriers.

Even in this modern era no one has dared to change that rule.” Locals said that once a very enthusiastic person took the initiative to do something big by collecting small jewels that he had promised to his mother. His results were not good. Since then no one has shown the courage to change the rules.” In four days, 160 kg of chicken sandesh is produced along with the wind. All of which takes place in mother’s worship. Editor Revati Mondal said, “After Ashtami Puja, the Harirluth river flooded the temple premises. Those who vowed and got results came. It consumes 10/12 quintals of wind in a year. “Many people carry their own weight.”

A youth of Murshidabad commits suicide