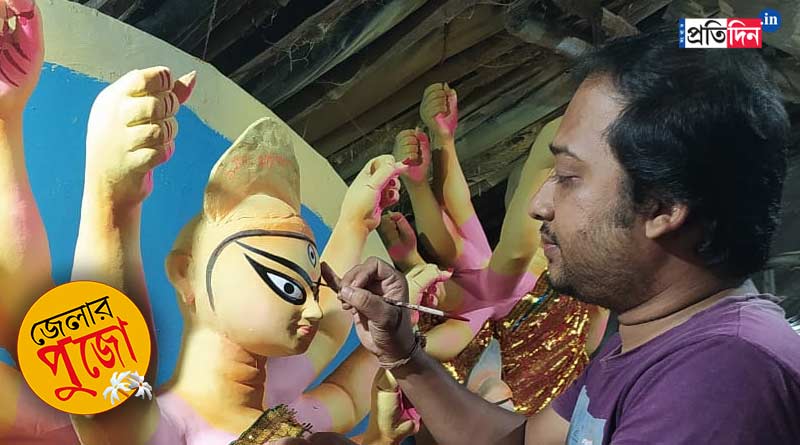 Devabrata Mandal, Canning: That land is not there. The custom of collecting taxes from the subjects has also gone down a long time ago. However, with the active participation of people from two local communities, the goddess is still worshiped in Majumdar’s family of Bhangar.

The century old Majumdar’s house is located in Swastyangachi village of Bhangar. This huge zamindar house of majumdars once used to host relatives and people. Majumdars had two storied houses in east, west and south. Now, of course, his broken state. A neighborhood has been de-existed. However, the two-story two-story house still stands tall. Although it is almost broken due to lack of renovation. However, according to the rules, Durga Puja is held every year at Majumdar’s house in Bhandar. The people of the house do not live but the daily worship of Govinda and Durga Puja A priest is kept for There is also a caretaker.

No more shine like before. The work of making Durga idol in Natmandir has been stopped. Stop animal sacrifice. However, during the Sharad festival, Hindus and Muslims mingled at Majumdar’s house, which added another dimension to the puja. Minority inhabited areas are destroyed. There are more Muslims than Hindus. Villagers of both communities rejoiced in this puja of Bhanada. They participated in various Puja events shoulder to shoulder with Hindus. On the day of Ashtami, everyone sits together and eats.

Tapas Majumdar on behalf of Majumdar’s house said that this time also the potter Indrajit Biswas of Shikharpur is making the Durga idol of Swastyangachi Majumdar’s house. After the structure pooja on Janmashtami, the work of making idols has started. Although this puja is not as grand as before, the participation of people from both communities here is impressive. This is the feature of this puja. As the Hindus of the village extend their helping hand in this puja. Similarly, Muslims also engaged in various activities. Even a Muslim youth has done the renovation work of Nath temple.