Is there any harm in giving Pushpanjali in Bengali? What Nrisingha Prasad Bhaduri said

https://chantbangla.org/News Daily Digital Desk: Mantra and sanskrit the language Both are closely related. This idea is fixed in our mind by long practice. Just as chanting of mantras is mandatory in any worship, we know that the language of that mantra is Sanskrit. Priests follow tradition and still chant in Sanskrit. Not that everyone knows the meaning of that Sanskrit mantra. In many cases, common people also face the problem of chanting Sanskrit mantras while offering garlands, as most people no longer practice the Sanskrit language and pronunciation. However, many people still believe that the tradition of mantras gets its due status in the Sanskrit language. Many people think that the chanting of the mantra should be in the language that everyone knows, in which the meaning of the mantra is clear. In other words, what I am saying in front of the god should be understood. Pronunciation is also purified. From that point of view Bengali chanting should be in Bengali language. It is in this context that ‘Sambad Pratidin Digital’ has launched ‘Pushpanjali #ChantBangla’. But is chanting in Bengal possible? Is there any harm in mantras if they move away from Sanskrit language or is there any potential harm in not chanting mantras in Sanskrit? Educationist Nrisingha Prasad Bhaduri answered this.

“The sweetness of the mantra, which once we were mesmerized by hearing, no one recites that mantra now. That is a Vedic mantra. Leaving the place of Vedic mantras used in yajnas, when a separate deity and deity-based mantras were created in the Puranic period, they were created leaving the Vedas aside. Instead of Yajna, worship changed, as a result, Vedic chants also changed. When this change was possible, when it was possible to break the statutory boundaries of Vedic reform, then I think, why should it not be possible to chant the mantra in Bengali? Narsinghamprasad Bhaduri. It is clear from his statement that the change in mantra took place a long time ago. From the Vedic age to the Puranic age, mantras changed according to the demands of time. In the same demand, if someone chants in Bengali instead of Sanskrit today, it is not an impossible event. But is there any possibility of guilt? In response, Nrisinghaprasad said, “God does not live in stone or wood. The deity resides in thought. As a result, there is no exaggeration in the mantras that I can say in Bengali where I just say ‘ma ma’. No offense.”

Making the matter more clear, he said, “Where is the fault? I can see God in arti. When we pronounce Sanskrit words, the pronunciation is not correct. Even if someone corrects the pronunciation, can they bring down the god? I don’t think so. The words are pronounced, but do not know their meaning. What is the use of pronouncing words that I do not know the meaning of? DurgaI said the mantra ‘Sharnye Tryambake’, but I don’t know what I said. I think if it is said in Bengali, it is much more convenient to surrender one’s feelings to a Bengali goddess. There is no possibility of fault in it. If you can convey your arti to mother in Bengali language, that is the most important thing. That is the greatest mantra.” 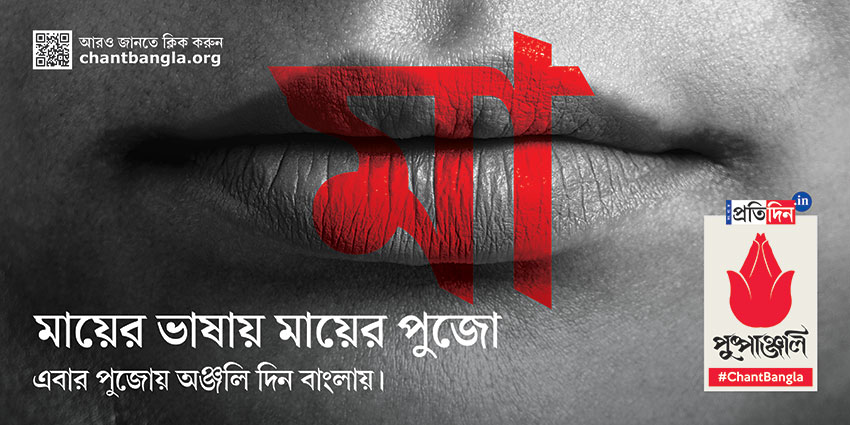 All over the world, Bengalis will give Anjali in Bengal this time. The Bengali translation of the mantra was done by Nrisinghaprasad Bhaduri himself, accompanied by Pabitra Sarkar and Kaliprasanna Bhattacharya. Join this initiative too. Stay with this initiative. Encourage your local puja committee to organize Pushpanjali with Bengali mantras. To download Bangla Chants and know more about ‘Sambad Pratidin Digital’ initiative ‘Pushpanjali #ChantBangla’ click: chantbangla.org