Rupayan Gangopadhyay: Left means old age. Bam means white hair. This myth was broken by the Insaf meeting of SFI, DYFI in Kolkata. Kolkata saw the tide of black hair. CPM State Secretary Mohammad Saleem made such a demand from the temporary stage in front of Victoria House on Tuesday afternoon. The heart of the city is blocked while the state secretary is making this speech. There was a red storm at the intersection of Dharmatala. Leftist students and youths gathered around.

The left student-youth organization organized the Insaf meeting on issues like Anis Khan’s death, ongoing corruption in recruitment. Called Dharmatala come. Responding to that call, left supporters from Howrah-Sealdah-Parkstreet square gathered in rows at Dharmatala square. First the meeting started on Y channel. Because permission was not given to hold the meeting in front of Victoria House. After the meeting started, the organizers were forced to change the venue due to the pressure of the crowd. 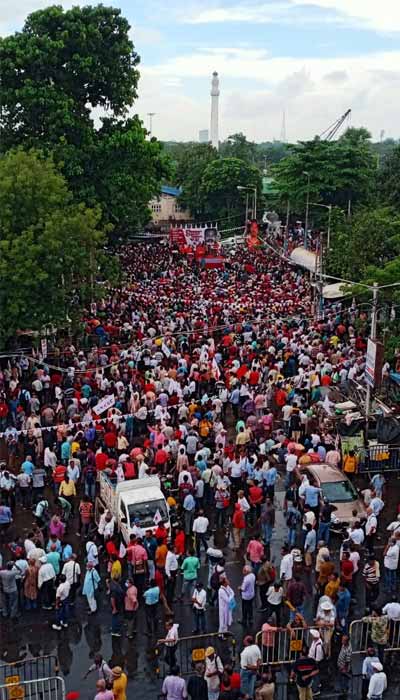 Selim warned from Dharmatala platform, “Don’t ask permission for any march, meeting of SFI, DYFI now. Telling the police, don’t show courage after that. District after district, people are coming down the road. The human mind does not understand the roots. Even anti-pseudo BJP doesn’t understand. Even the police didn’t understand.” Meenakshi Mukhopadhyay called that this movement should be delivered booth by booth.

From noon on this day, the procession and meeting of the left students and youths, the heart of Kolkata, Dharmatala, was blocked. Because of which our people have to suffer. Traffic came to a complete standstill in Lenin Sarani area, CR Avenue adjacent to Dharmatala. Traffic from Raj Bhavan to Dharmatala also stopped. A lot of turns are made through the Central and Lenin columns.