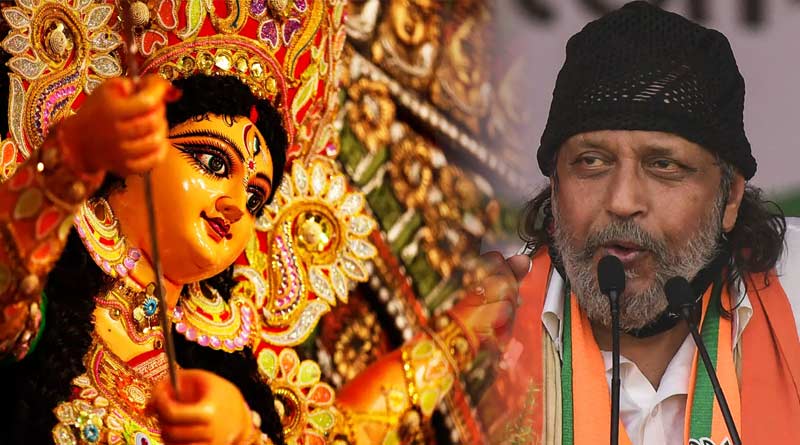 Rupayan Gangopadhyay: Durga Puja(Durga Puja 2022) BJP’s trust in public relations is Mithun Chakraborty. Apart from Calcutta, he can inaugurate pujas in Balurghat, Burdwan, Bolpur. Mithun Chakraborty can also be seen with Amit Shah at BJP’s EZCC puja. Trinamool leaders did not stop to sneer at BJP’s program by suddenly putting Mithun Chakraborty in front of the Puja.

Mithun Chakraborty arrived in Kolkata on Friday morning. It is heard that this Puja will be spent in Tilottma. ‘Mahguru’ may go to inaugurate state BJP president Sukant Majumdar’s puja at Balurghat next week. Apart from this, he can go to the inauguration of puja in Bolpur and Burdwan. It is heard that Mithun Chakraborty may go to several pujas in Kolkata. Although nothing has been confirmed by the party in this regard. However, Mithun will attend the puja organized by BJP at EZCC. He can also be seen with Amit Shah. Sources in the know claim that the BJP is trying to use Mithun Chakraborty’s popularity to get extra mileage in Puja.

In this regard, Trinamool State General Secretary Kunal Ghosh said, “BJP is bringing down traitors in public relations at Puja. But the people of Bengal do not respect traitors.” Trinamool MP Shantanu Sen said, “It is good that Mithun Chakraborty is coming. But Khabardar, don’t paint anyone in a flash.” However, the BJP is unwilling to pay attention to the sarcasm of Trinamool leaders. In this regard, Shamik Bhattacharya said, “Trinamool exploited Mithun’s popularity. Trinamool did not make him South. There is no use in doing these things, change will come in Bengal.”

Incidentally, since the defeat in the assembly elections, the disunity of the Bengal BJP has not stopped. Therefore Gerua Shibir plans to bring heavyweight leaders to Bengal keeping Shardotsava ahead of it to increase public relations. Trust is Amit Shah and JP Nadda. Bengal BJP (BJP) leaders are in full swing as two heavyweight leaders of the party have expressed their desire to go to Kolkata for the puja. Just like JP Nadda, Shah, Mithun is also a tool of the BJP to strengthen its position and strengthen its cadres.